Barring major upsets, Vagabond achieved the furthest point South in this wander around Britain at 13:01 yesterday (6th July). Not quite up to the acheivements of Earnest Shackleton (one of my boyhood heroes) so we didn’t hold any ceremony at the time; besdies which we were both too busy tacking.
I cast off from Falmouth at about half past eight in the morning, in drizzle. The forecast was for a northerly wind to “back” (a technical term, meaning to change direction as if going round the compass anti clockwise) towards the South West at around midday. Oh yes, rain was included too.
In theory, this meant we could sail along with the wind behinds us southwards towards the Lizard against the last gasp of the flooding tide. Then catch the tide as it turned just before the Lizard; once past the point tack to turn NW to Penzance as the wind changed too.
So much for theory.
Once we were outside the river entrance, the wind died and so di the rain. On came Freddie and we breasted the tide down the Manacles, a fearsome lump of rocks some 10 miles north of the Lizard. Here we found a North Westerly wind which powered us down to the Lizard.  We sailed along, slowly gaining speed as the tide turned. 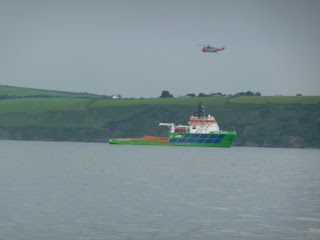 We watched helicopters play with anchored and moving ships (whether the ships appreciated this is not known – there didn’t seem to be any associated radio traffic. We kept a wary eye on showers as they spread around but missed us.
﻿﻿ ﻿﻿
As we neared the Lizard, the pace quickened. In fact it caught me out because I had intended to pass by the Lizard close inshore, to avoid the rough water tide race “down tide” of the point. By this time the whole English Channel was emptying into the Atlantic – we were romping along so fast (9kn) that when I realised I should have turned to starboard to follow the coast, it was too late. We would have been swept into and thrown about by the race. In fact we altered course a bit towards the east to miss it. According to my chartwork  (and GPS) we were clear of the race – but it was obvious that the water couldn’t read the chart. We were swept through  a stream of apparent  standing waves, about 2 metres from crest to trough and about 50 metres apart. After what seemed an age of this excitment (probably only 10 minutes or so and some white water company could have packaged and sold the product), the water calmed downdown; normal sailing resumed.
We could carry on to the Scilly Isles......but sense prevailed: now we could tack. As we did so, it seemed to me that the wind had shifted a bit and we were now pointing at Penzance. Slowly the tidal drift eased off and so did the wind. On came Freddie again, for, if we lingered here, we’d be swept back up the Channel as the tide flooded again.
﻿﻿﻿﻿ ﻿ ﻿
We crept into the relative stillness of Penzance bay and resumed leisurely sailing in calm waters, taking a brief look at St Michaels mount on the way so that  we arrived at the Penzance “wet dock”  just as the gate opened to let the last gasp of the tide in. There then followed an hour of chaos. Vagabond and three French yachts turned up at the same time. A freighter came out. Two fishing boats were eased out of berths from behind other boats and Vagabond was eventually found a berth, the seventh out on a raft! We were so far from the land that there was no question of me be able to take my own mooring lines ashore, so I tied up to the boat alongsidean d went ashore for a meal. It was raining when I got back to the boat: it seemed a good idea to erect the tent. That done, I went to bed.
﻿﻿﻿﻿﻿﻿﻿﻿
I was woken at about 2 o’clock. The rain was lashing down and the wind had risen to a dull howl. I remembered that the lines securing the boat that I was secured to were not particularly substantial. Thank goodness I had erected the tent. It meant that I could put my wet weather gear on over my pyjamas in relatively dry conditions and go out to do things with mooring lines. When I woke next (in the morning) I found that we were still in the same place.
﻿﻿ ﻿﻿

﻿﻿﻿﻿﻿﻿﻿﻿﻿﻿
The weather is forecast to be awful on Saturday, so another day of rest lies ahead. Then it’s the first real challenge of the trip – rounding Lands End. From now we are territory where there are no marinas. In fact the North Coast of Cornwall is pretty unforgiving, for there aren’t many harbours at all.
We need a period with some good weather......
Posted by Rob