I expect you have all given up hope. Well, Vagabond 2 is on order, she'll be called RIFF RAFF and should be launched in April.

You can find her blog at

Vagabond is now in Italy.

Here she is being collected from Northney. 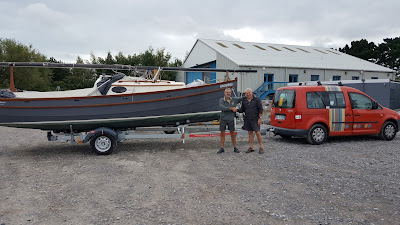 Is this the end of the story?

Is there Vagabond 2 lurking in the offing, just below the horizon?

Posted by Rob No comments:

Anyone want to buy a trailer?

We have found a buyer!

Vagabond is due to be exported to Italy during September. So she sits on her trailer in Northney awaiting collection.

There is one slight glitch. Terence (the trailer I hastily remind my loyal readership) is destined to remain in the UK. Apparently, harmonisation of EU regulations has not yet reached trailers or at least those built in the UK before 2013. (Given Brexit,  trailer harmoisation may now never be achieved!) Thus, whilst it would be fine for a UK citizen to tow Terence around Italy when on holiday, it is not legal for anyone who lives there to do so.

Anyone want to buy a trailer, electric winch and all? Immaculately set up (tow, launch and recovery proven even) for a BC23!
Posted by Rob No comments:

Slight change of plan. We may have found a buyer so Vagabond stays in the farmers barn for a week or two.
Posted by Rob No comments:

You may have heard a rumour hat Vagabond is for sale. Yes, she is. BUT we're having a last (?) cruise together. After an appearance at the Swallow raid in Mylor last week, she's sitting on Terence (the trailer) waiting to be hitched to Martina and towed to Oban - tomorrow!

Mylor was deliciously warm and sunny. Oban looks to be cold and wet but the islands and all that crinkly coastline are calling.
Posted by Rob 2 comments:

It's almost the end of April. Vagabond has been on the briny twice since I hitched her, Terence (the trailer) behind Martina and drove the ensemble south to the Marina at Northney on Hayling Island for the summer quarters

A couple of "shake down"  outings showed that  the changes made during the winter work, some better than others.

The "undercarriage doors"  in the outboard well are a partial success, in that the amount of swirl in the chamber is much less that it was with the battered Mylar strips that used to try to keep the worst of the water out.
But raising and lowering them is a bit of a palaver.
One has images of naval officers shouting commands to Petty Officers, who pass them to the AB's who actually do the work :
"Close up well crew"
"Well Crew ready sir"
"Let go under carrgage doors."
"Aye Aye sir undercarriage doors let go"
"Haul in opening uphaul"
"Aye Aye sir, uphaul hauled in and doors open"
"Lower engine and prepare to start" etc etc

You get the idea: Lot's of shouting and tugging of forelocks.

The electric winch and bilge pump are both a success. The first is fixed to the trailer, together with battery and solar panel, in place of the hand winch of yesteryear.   I had noticed towards the end of last season that age was  starting to tell on the owner and getting Vagabond onto the trailer was almost too much of an effort. So, with a bit of bracketry knocked up by Swallows metal smith in Cardigan, a "Warrior" winch was fitted to the front of the trailer and various electrics were designed and fitted (cobbled together). The winch came with a wandering hand held "wire free" controller, so, once the dyneema string on the winch has been unrolled enough to clip it on to the eye on Vagabonds bows, one can stand on the pontoon alongside the boat, press the "up" button and watch as the winch draws her up onto the trailer. If necessary, a casual push or pull on the side of the boat keeps her in line. So far, it seems to work OK, although I am very aware that there is no manual back up should the electrics fail......

The electric bilge pump (about a tenner from ebay) emptied that ballast tanks in about 5 minutes, so you can leave it to get on with the task whilst positioning the trailer..

The sailing on the two days was pretty uneventful - a slow drift down with the ebbing spring tide on day one, and a fine display of short tacks on an ebbing neap tide for day two. The fine display was a little disrupted by gently running aground a couple of times as I left the tacks a little late but no damage seems to have been done. I must remember that 1.3 metres on the echo sounder means 1.3 metres and not 2!

On the first day, we had the harbour to ourselves and on the second a BRE joined in the tacking excerises.

The skipper is off to have another eye operation next week, so there's be no more news until towards the end of May.

It's been a bit blowy in the last few weeks. I quite glad that Vagabond slumbers in the barn. The perceptive amongst my readers will have notice there were no blog posts at all in 2016. Vagabond joined in the excitement of the Swallow Yachts raid in Mylor and the owner broke the mast when preparing to tow her home. So she spent some time at Swallow Yachts yard having it repaired and a few bits and bobs fitted.

She now sports the "wider berth" option to account for the ever increasing girth of the owner, a sparkling new coat of varnish on most of the wood work, and a few repairs to things that broke. The owner has fitted an electric winch to the trailer to account for his increasing feebleness, together with batteries, control boxes and solar panels to keep it charged. In place of the slat arrangement in the outboard well, there is a pair of under carriage doors, controlled by suitable pieces of string.

None of theses new devices have yet seen action.

The owner, whilst mulling over the results of his MSc course has also made some mounts in the well for the dinghy oars in the outboard well . Not that the owner is planing to take Vagabond rowing .....
It's just that an incident occurred during the Swallow raid. There was a strong wind blowing down the channel approaching the berthing pontoon and, despite Freddy's frantic efforts to slow us down, Vagabond's stem made a bit of a dent in the pontoon. Had the oars (or even the bucket) been readily to hand, rather than buried in a locker, we might have slowed down sufficiently to make a dignified entrance.

We're off to the sea soon to put this lot through their paces.
Watch this space.
Posted by Rob No comments: